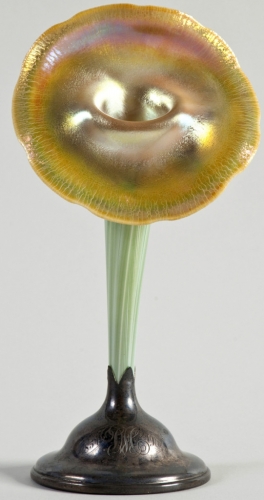 This installation is a showcase of diverse works, including not only lustrous art glass from Loetz (Bohemia) and Tiffany Studios (New York City), but ceramics and enamels from Rookwood Pottery (Cincinnati), S. A. Weller Pottery (Zanesville, Ohio), Robert Hanke (Bohemia), Camille Fauré (France), and others. These firms and designers successfully produced supremely elegant and riveting art with iridescent rainbow colors on par with nature. Until the mid-nineteenth century, this fascinating optical light effect could only be seen in nature. About that time, archeologists began unearthing antique glass that had become iridescent from the effects of minerals, metals, and salts in the soil in which it had been buried for centuries. The newly discovered iridized antique glass inspired the premier decorative art studios of the West, including Louis Comfort Tiffany’s firm in the United States and Glasfabrik Johann Loetz Witwe in Europe.  Although interest in iridescence waned after World War I, it has never died.