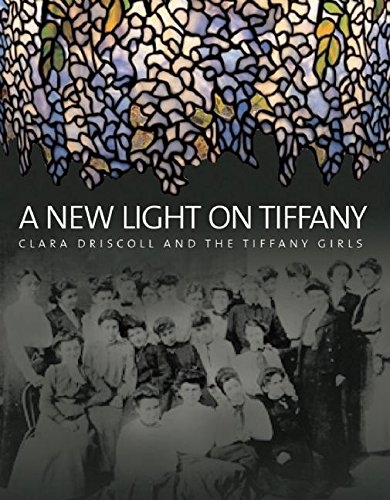 Louis Comfort Tiffany (1848-1933) is celebrated today as one of the most influential creative designers of the late 19th- and early 20th-centuries. A New Light on Tiffany: Clara Driscoll and the Tiffany Girls presents the celebrated works of Tiffany Studios in an entirely new context, focusing on the "Tiffany Girls", the 27 women who laboured behind the scenes to create the masterpieces now inextricably linked to the Tiffany name.

Recently discovered correspondence written by Ohio-born Clara Driscoll, head of the so-called "Women's Glass Cutting Department" at Tiffany Studios, reveals in convincing and vivid detail how it was in fact Driscoll who generated designs for such masterpieces as the famous Wisteria, Dragonfly and Peony goods. At the heart of the book are over 50 Tiffany lamps, windows, ceramics, enamels and mosaics, supplemented by a wide array of related documents and archival photographs.

Martin Eidelberg is a professor of art history at Rutgers Univeristy and a widely acknowldged expert on Tiffany Glass.  He is the author of or contributer to numerous books on twentieth-century decorative art.

Nina Gray (deceased) was an independent curator of American arts.  She held curatorial positions at The New-York Historical Socity, the Park Avenue Armory, and served as consultant to numerous institutions.

Margaret Hofer is Curator of Decorative Arts at the New York Historical Society where she has worked with the Neustadt Collection of Tiffany lamps.

A New Light on Tiffany: Clara Driscoll and the Tiffany Girls - Purchase Options